The Mission of District 33K Lions Eyemobile, Inc. is to provide free health screenings to the residents of Massachusetts through local Lions Clubs. 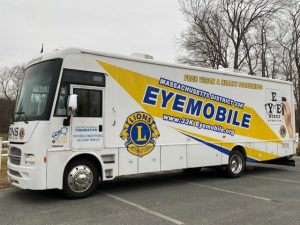 Over the years there have been several vehicles and trailers named the Eyemobile, the first unit emerged in 1970. The unit was a dream of then DG Arthur Metzger. The unit was a used furniture van donated by Lion Ed Lynch of the Somerville Lions Club. It was replaced in 1972 by a movable trailer. The Somerville and Waltham Lions Clubs raised money to acquire the new unit while several Clubs donated funds to purchase the necessary medical equipment. The first user of the new trailer was the Brighton Lions Club.

That same year the Lions of District 33K elected to accept the Eyemobile and its mission of providing free health screenings as a district project and expanded its area of coverage to include 58 communities, in and around the greater Boston areas. At the same time, the Eyemobile became a non-profit corporation, a wholly owned entity of the Lions Clubs of District 33K. District Governor Arthur Metzger was elected its first president. It served with distinction until 1988 when another movable unit with new medical equipment replaced it. After screening thousands of clients, the second movable trailer was retired in 1998.

The present Eyemobile, a modern self powered vehicle with state-of-art medical equipment, was inaugurated in the spring of 1998. It was the result of a two year fund raising effort; $180,000 was raised through the generosity of the Lions Clubs of District 33K and several grants including LCIF. Last year over 2,000 people received 6,500 screenings of which twenty-seven percent were in the abnormal range. Most were referred for professional follow-up.

Since its inception, the Eyemobile has provided a variety of health screenings to well over 25,000 children and adults. Services include vision, hearing, and blood pressure screenings on a gratis basis. The Eyemobile is used at local health fairs, school functions, parades, county fairs, community functions and other Lion sponsored activities. Emphasis is directed towards the elderly, African Americans, Hispanics, Native Americans and children; most are high-risk groups for eye related diseases. In many cases the local Lions clubs fund the next level of treatment, or help find low cost treatment when screenings indicate possible health problems.

Local Lions Clubs sponsor the screenings in their communities. Volunteers provide all the necessary medical and administrative staffing.  Any costs, such utilities, and publicity, are borne by the sponsoring club. There is no cost to the public whatsoever. Operating expenses and maintenance costs of the Eyemobile are offset by donations from local Lions clubs.